It seems that the stars were aligned and things fell into place a few days ago and we were able to go ahead with our final cycle.

In the midst of all the G.20 nonsense going on downtown, I had to go to the clinic on today for blood work and ultrasound to get started. Considering the rioting and violence that was going on the previous night, I wasn't sure if the clinic was going to be open as is located down in the area where the protesters were roaming around last night. I gave them a call in this morning to be sure they were open and then headed down. Traffic was very light, and so I got downtown in record time. I usually park in the hospital garage but it was closed up as were other parking garages, so I had to find street parking. Luckily not a problem. It was rather surreal walking down to the clinic to pass police officers stationed on the street with their riot gear hanging off their belts. (Police headquarters is up the street from the clinic.)

Anyway, once up in the clinic, it was business as usual with a packed waiting room. Signed in on the boards for blood, ultrasound and to see the RE. It was probably an hour wait to be called for ultrasound (blood took 2 minutes). I had a trainee tech as well as the head ultrasound tech, so I was part of a teaching session. Not a bad thing because it meant they discussed what they were seeing so I had confirmation that I have a very small subserosal fibroid (which I knew). My OB had told me back in December about it and didn't seem concerned. I forgot to mention it when I talked to the RE. I'll have to try and remember to ask him when I'm back for the lining check.

When I finally got in to see him, we discussed that the protocol is essentially the same as the last. However, he was agreeable to me starting the fragmin today with the rest of the meds. He also looked over the blood results from March when I was there and asked if I'd ever had my thyroid tested. I said no, even though like every other overweight female I've thought that it's sluggish. :) In any case, the results showed that the number has gone up since December (I had written them down, but can't find them now) and I'm now showing as borderline. So he called over to the lab to ask them to run my TSH, T3 and T4 and as well put me on Levothyroxine.
So, my daily med schedule is as follows:

I had to put reminders in my blackberry to make sure I remembered the mid day meds. ;)

So, I have to go back in 10-13 days based on my schedule for a lining check, and depending on how it is, transfer would be 3 days later. Based on my past response, I've not usually had an issue building my lining, so if I go back in on July 8th or 9th, then transfer would be the 12th (no Sunday transfer) or 13th.

And just because a post is not complete without a cake photo, here is a picture of the cupcakes I made last night....

The chocolate ones taste just like a Hos.tess cupcake. :) 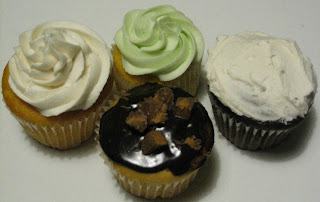 Yay for the cycle! I'm so glad everything fell into place!

I'm cheering you on every step of the way, hon, you know that.

Cupcakes look awesome - save me a chocolate one? Mmmmm marshmallow filling.

Fingers crossed for you and V. Now, I will have to see about coming up to Toronto just for all the snackies you are posting about.

I am drooling over those cupcakes, especially the peanut butter cup one. Good luck with your cycle! I'm so glad you're finally getting to do it.

I am usually a chocolate girl, but I think I could totally go for a margarita cupcake!

soooooooo excited & hopeful for you guys!!

i never comment but i have been following your blog and want to say how excited i am about you cycling. i am crossing my fingers that you will be parents soon.xo

Just wanted to say that I'm still here and reading and I am -so- keeping my fingers crossed for you and V this go 'round. I know you've waited a long time to cycle but I bet it's exciting to get it going huh? Just remember, we're all here with you and no matter how it turns out, we'll still be here. Much love to you and Victor and many, many prayers for the best possible outcome!
Oh yeah... and if you are heading this way at all, cupcakes please!!! Any kind will do! Yum!

Good luck with your cycle! Yay! And those cupcakes look so yummy! Where did you get the recipies?

Good luck with your cycle! Yay! And those cupcakes look so yummy! Where did you get the recipies? I want to eat some!

Thanks for all the good wishes...

iambrowneyedgirl - I find my recipes on line and from some books that I have, and ideas from others.