There's really not much going on so I thought I'd post some snow pictures for Cali. :) 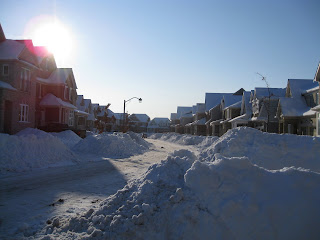 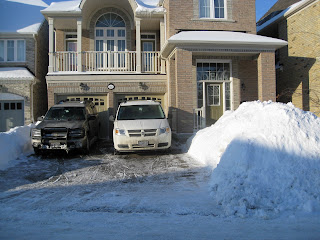 And proof the snow is higher than I am. :) 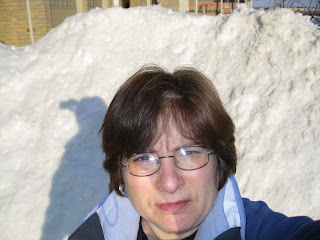 Other than winter, there's not much going on. V and I have commitments up the ying yang for the next few months so now it looks like May/June for the FET but that's okay. I really want to try and lose some of the weight I put on during the last cycles and over Christmas.

An update of sorts

I have been trying to write this post for days but I just haven’t been able to focused enough to do so.

It has been a busy 6-7 weeks for V and I and overall I think we’re just recovering from it now. Read on and you’ll see why. :)

As I have mentioned already, we hosted two baby showers in November which was the beginning of our 6 weeks of holiday hosting. As V and I have posted recently, both happy couples had their babies. Patti and Mark had Jack (check the link for pictures) and K and L had Mikaela.

Following those two busy weekends, V and I hosted our annual Christmas Poker Potluck which is a gathering of a group of our friends who play poker regularly throughout the year but gather at Christmas for some good food, a gift exchange (we do the auction type exchange), and of course poker. This was the 8th year we’ve gotten together at Christmas. I just couldn’t face doing anything particularly Christmas-y, like turkey or ham, for the entrée (that was our contribution) as Christmas was just a couple of weeks away, so we had the ever popular and totally un-Christmasy Pulled Pork along with some great sides and appetizers provided by everyone else. I’ve included the link to the Pulled Pork. Don’t let the root beer put you off. It’s excellent.

The next weekend (yes these events occurred on consecutive Saturdays commencing on November 22nd) was our annual Christmas Open House which we’ve been hosting for the last 5 years. The Evite always has at least 100 people on it but we rarely have that many people show up. Last year it was a small group as we were hit with a snow storm that day. However, this year was a rounding success with at least 50 attendees spread over the afternoon/evening. It’s always a long day but worth it as we get to spend some time with some great friends. People straggled in from 3pm onwards. I think the last group left around 1:30am after some Dance Dance Revolution on the Wii. Always a hit with the group.

The next weekend was a small, casual brunch with family who weren’t able to come to the open house. However, we were hit with a snow storm and they begged off. Although we would have liked to see everyone, we weren’t disappointed as V and I were exhausted. But, rather than rest, we took the opportunity to run errands and buy some last needed Christmas gifts as the big day was now 5 days away.

Stupidly I decided not to take the three days off right before Christmas. Boy could I have used them. V and I were hosting the family Christmas and were expecting 30 people for dinner. We had agreed to do so as long as the event was potluck. So, I ordered, and picked up on the 22nd, a 23lb turkey and an 18lb ham. This year we had expanded our family to include K and L as they were expecting their baby any time as K had been experiencing pre-labour for a little while, and we had some new found family from the UK attending that we’d found on Face.book. We all had a great time and all the hard work and fatigue was well worth it.

Several days after Christmas V and I headed off to Ott.awa and Mon.treal to visit some more friends and family that we hadn’t seen in a while. We both thoroughly enjoyed the break and there’s nothing like three-way Dance Dance Revolution on the Wii. If you’ve got the Wii but only have one mat for DDR, go get another or two. It’s a riot! Although we’d had several invitations for New Years Eve, we just wanted to spend the night home, watching a movie, just the two of us. So on the 31st we headed home with a brief stop on Am.herst Isl.and to visit some friends we hadn’t seen in a long time. We made it home, found some dinner, and sat down to relax. I have to say, this is the first year in a while that neither of us saw the new year in. Fast asleep….

It’s now 2009 and we’re hoping it’s a year of change. I’ve started back to try and lose some of the weight that I put on during the last couple of cycles plus over Christmas, I’m back on the Wii Fit as well. We’re going to make a concerted effort to clean up and discard/organize our basement. We’re hoping to get away someplace warm this year, and we’ve got a trip to Chicago over V’s birthday, for our nephew’s Bar Mitzvah. During all of this, we’re planning on doing our last FET cycle with the three embryos we’ve still got. I really, really want this to work. Who doesn’t? I am too afraid to hope or think positively at this point. I will admit that the idea of doing this cycle, maybe in March or April?, is never really out of my thoughts. I often wish that we hit the jackpot and were able to do the last cycle with a surrogate. However, I am looking forward to getting back in the saddle, so to speak. :) I continue to read everyone’s blogs and comment where I feel I want to. I am always happy for those who are getting great news, and sad for those who continue to struggle. I particularly want to congratulate Gil and her hubby who recently got their first positive beta and saw on the ultrasound that two embryos stuck!

Maybe Ontario is finally getting a clue?

Here's an interesting article on Ontario and proposed funding for infertility treatment. Because Quebec has agreed to fund IVF, people are now hoping that Ontario will follow suit.

In addition, as quoted from the link below, "Ontario has appointed an expert panel on fertility treatment and adoption to help find solutions for people who are trying to start or expand a family. The panel will recommend ways to help make both fertility treatment and adoption more accessible and affordable". This panel has created a survey to gain information from Ontarians who have an interest in or had experience with adoption or infertility. The survey has been extended to January 12, 2009 so please go up and complete the survey.

http://www.gov.on.ca/children/english/infertilityAdoption/index.html
Posted by Pam at 4:57 PM No comments:

Another couple was pregnant at the same time and in the same time-frame as Patti and Mark; the wife is my friend of nearly thirty years dating back to grade nine. The H's had a baby girl, their third child following two boys (15 and 13), the day after Patti and Mark. Mother and child are at home and doing well and we wish them all the best as well. As I currently have the cold, I will be unable to visit the little one for a while; Pam will have to represent us both.

In a couple of months, we will be doing this again as we have a third couple near and dear to us that are expecting.