It's that time again... Mel's Weekly Show & Tell. As promised, here is the final cake we did in class this past week. They take all four weeks to teach you how to make the rose that appears on this cake. It's like they want you to learn how to do each section, even though it's something that could be done in one class. Needless to say, it isn't easy. I'll have to make up some icing just to practice the roses. Maybe I'll even make a cake to put them on. :) Somehow I don't think V will object to cake. :)

Well. here are the pics. The roses were actually a light lavender colour but are showing up as blue in the photos.

Next up, Fondant & Gum Paste class...not sure if there will be much for a show and tell post. Stay tuned. :) 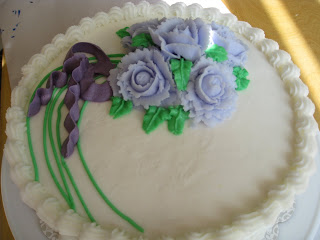 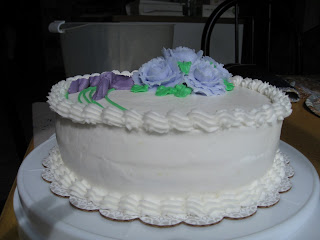 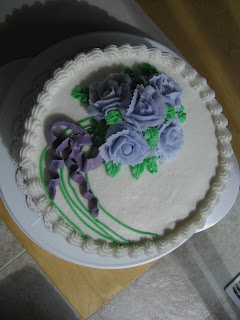 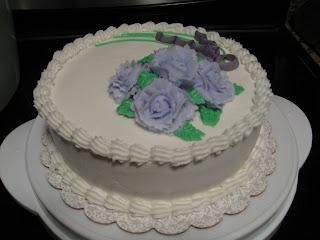 Normally that title would have meant something, perhaps the beginning of a cycle or something. However, today it means nothing except that it's CD2. I've not mentioned it before but I've been taking the DHEA for the last 3-4 months. I haven't done any monitoring, and we just go with the flow each month. I have noticed though that my periods have gone from lasting about a day and a half to maybe 2-3 days. I think this is better. I'm still as regular as always too. We haven't made any plans to do our last FET. Due to travel over this past weekend to Chicago for our nephew's Bar Mitzvah, some unexpected expenses, and just overall day to day stuff, it looks like it won't happen until July/August. I'd prefer it to happen before we get the invoice for the next year's embryos storage.

Anyway, other than the Show and Tell posts I've been doing (go take a look at my handiwork), there's not much going on. This past weekend was our nephew's Bar Mitzvah. Since it was a long weekend here in Canada, we took three extra days off and drove down to have some fun in the windy city before all of the festivities.

For those who know us IRL, promptness is not our forte. We had originally planned on leaving late on the 12th to arrive in the morning on the 13th. However, our very good friend's son was being confirmed on the 12th and V was his sponsor so we happily delayed our departure to be able to participate.

My SIL had asked me to bake for her for a few of the events which I happily did leading up to the past week. However, I found myself baking on last thing late on the 12th which meant I didn't get to bed until 2am...and considering V wanted to leave at 4am....it wasn't looking good. However, he saw just how tired I was at 4am and didn't push it. However, we didn't push it at all and didn't end up leaving until nearly 4pm.

Our drive was fairly uneventful until we reached Indiana. V was driving and I was dozing on and off (I don't sleep well in the car) and waking when I'd feel the wind pushing the van. About 30 miles outside of Gary the winds really picked up and the rain started. First it was just raining hard for a bit, then the rain got harder which required the fast speed on the wipers. It wasn't more than 10-20 minutes like that when the wipers just weren't cutting it. We were forced to reduce our speed as was everyone else on the road. About 10 miles outside of Gary the rain got so bad it was like the sky opened and a faucet was turned on. The wipers did nothing. We were forced to stop in the road where we were, as was the vehicle in front of us. We couldn't see the side of the road to be able to make our way over to the shoulder. V kept an eye on the rear view mirror to watch for approaching vehicles. After a few minutes, the rain sort of eased a bit and he decided we were better off moving and staying ahead of the traffic than sitting on the side of the road. Besides, we'd been listening to a Chicago radio station and they'd made no mention of the storm so we had to be able to drive out of it.

We carried on. Everything was pitch black. There was no lights except when the lightening would flash so bright it would make you squint. It was during one of these flashes, after V saw a semi truck veer around something in the road, that we saw what he'd gone around....it was a semi truck on its side across 3 of the 5 lanes (we were right by an off ramp). We were about 100 yards from it. All we saw during the flash was a long rectangular frame. V was able to slow and go around it which was when we saw the cab of the truck with it's lights still on. We pulled over on the other side as had several other vehicles. He considered getting out to check on the driver but we saw that another person had done that as he was struggling against the wind to open his own car door. I had said just earlier to V, during one of our stops on the road when the van was just being shaken from side to side, that this was gale force winds, like a hurricane.

We decided to continue on as we were about a half hour from our hotel. Once we reached the hotel, and had the news on the tv, we found out that the greater Chicago area had been under a tornado watch...so we had the "pleasure" of driving through tornado conditions. Now we wish we'd taken pictures! However, we were both too scared I think to even consider it.

Our weekend continued at a more sedate pace. The next day was a beautiful, warm sunny day and after dropping off the baked goods at my brother's, we headed downtown into the city to walk up the Mag.nificent Mile and got to Pizz.aria Un.o for some authentic deep dish pizza. It turned out that this was the best day, weather-wise of the whole weekend as there ended up being rain on Friday and Saturday.

On Saturday, our nephew did a fabulous job and everyone had a great time. Saturday was also V's birthday but he didn't want anyone to make a fuss so as to not take away from B's day. However, our table at dinner did figure it out when the waiter brought over dessert with a candle in it...and we all sang, and totally embarrassed V. It was great! :) Sunday we headed back home late in the afternoon after brunch at my brother's. Thankfully we had Monday off to recover. :)

Below are some pictures we took when we were downtown. 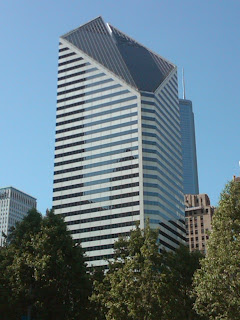 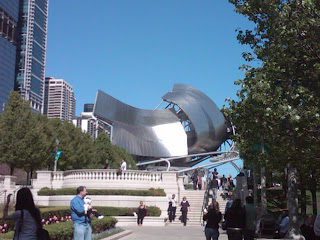 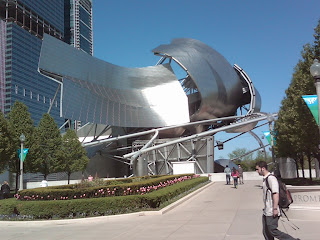 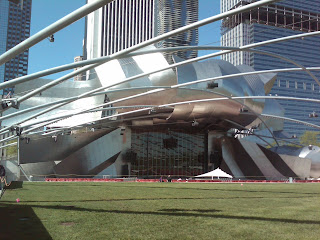 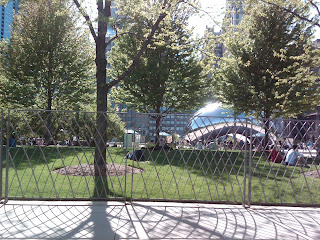 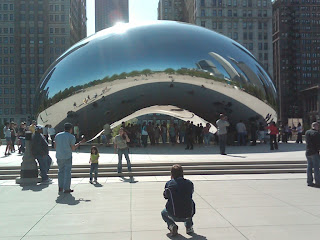 The Cloud Gate aka The Bean in Millenium Park followed by multiple reflections in The Bean. 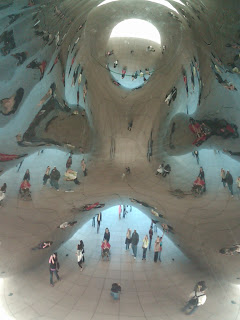 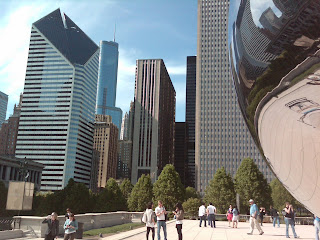 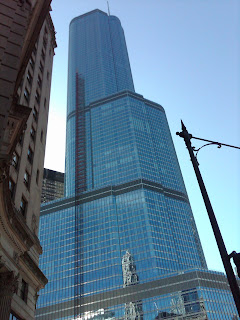 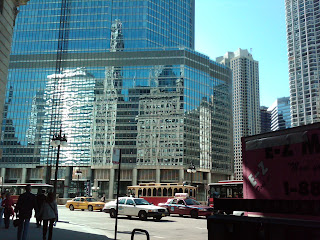 The following pictures are of an art installation along Michigan Avenue called Green Revolution: Fill which represents the consistent growth of waste which we as a people on the planet produce. In the plaque it says "the ultimate goal is to create awareness in all of us and, as a result, help us think twice before disposing of objects that could instead be reused and creatively given another life as new materials. 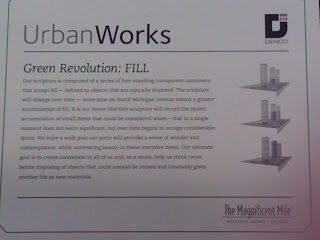 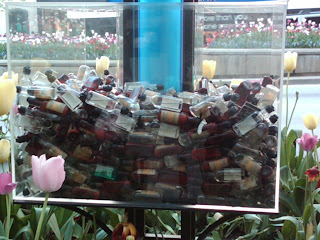 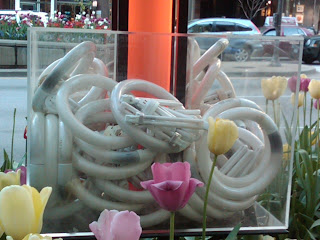 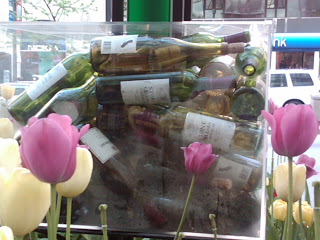 I'm a little late because we've been away for the weekend as this is a long weekend in Canada. We have just returned from 4 days in Chicago for our nephew's Bar Mitzvah. My SIL had asked if I would bring some baking for her to use as the various events over the weekend. As you've all guessed by now that's not really a problem for me. :)

So for this week's show and tell, I wanted to show you these cookies I made for the Bar Mitzvah boy. He is a huge Chic.ago Whi.te So.x fan. They were a huge hit and I had a great time making them.

Check out these pictures and then go and check out who else is showing in the class. And come back next week for the final picture in the cake series. :) 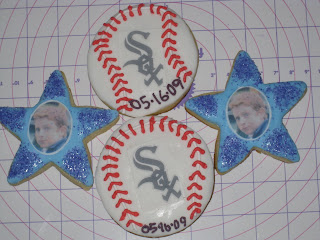 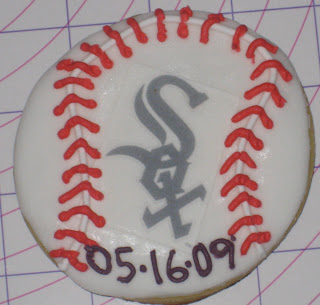 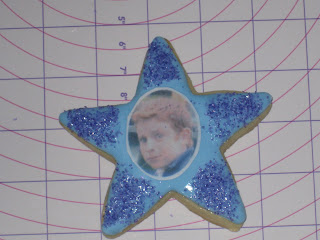 SO, I'm back for more of Mel's Show and Tell. As promised, here's this week's cake from class. I liked this one better than the last. Besides the fact that I made the cake chocolate with cherry filling (mmmmm), the butter cream tasted better. I will admit that I didn't make the clown sitting on the side of the cake. My cake was the demo for that one, but I made the others. :) I really like this cake. Hope you do too.

Afterwards, go and check out the others in the class and see what they're showing. 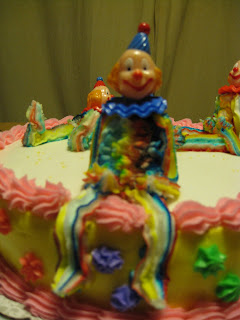 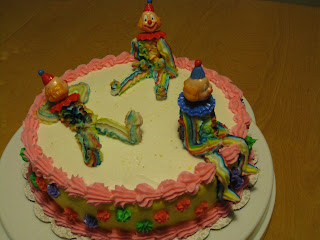 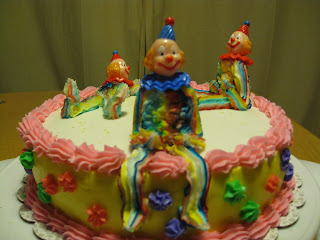