Thanks to the organizational skills of the lovely Kym, and wonderful Brown Eyed Girl, I no longer have cold feet. :)

was a beautiful sunny day today, nice and warm and I arrived home to find a box with these - 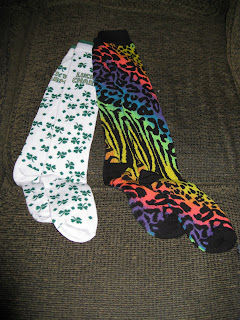 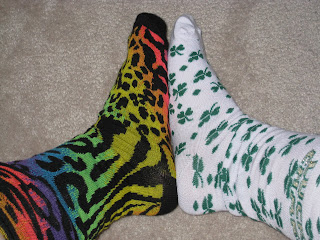 When Kym organizes SITM, it's a way to bring the IF community closer together and give us the opportunity to "meet" others. The support I've gotten from the IF community has been huge. Although we've been struggling without success for almost 5 years, I've had so many wonderful women (and men) commenting and cheering us on. It really makes a huge difference to know that there are others out there that understand. And I've been fortunate enough to meet some of you IRL like Aurelia and Gil. And even though I don't know many of you, I feel like "we could hang" as V would say. So to all of you I would like to say thank you for your kind words, the hugs, and the advice.
Posted by Pam at 8:30 PM 2 comments:

And so it begins....sort of

So, two days ago was CD2...normally this would signal the start of a cycle and in a way it does...sort of.

V and I have decided that we're going to do the final FET either in April or May, although it's looking like it will likely be May. So, I figured that I would head into the clinic on CD2 of my March cycle to say hello, indicate our intentions, find out costs and see if any blood work needed to be done since it's been about 14 months since we've cycled. 14 months!! For some reason, in my head, I was thinking it was less than a year which just wasn't possible.

Anyway, nothing has changed, except perhaps their signup process for ultrasounds and that's much improved. I got in just as monitorong was ending at 10am as I had an appointment for a haircut before that. I explained to the receptionist why I was there and we decide that I should just sign up for ultrasound as I will likely have extra bloodwork. I sign my name, take my number (52, I think they're ast 42) and sit down and proceed to wait. The waiting room is pretty busy (see, nothing has changed) and there are about a half dozen toddlers running around, all under 2. That's the only reason I don't like going on the weekend. I've never really had the same feelings as others at seeing children in the waiting room, as I understand it can be a necessary evil. But with us leading up to our last cycle, it is a little more difficult.

I wait for about an hour to be called for the ultrasound, and I believe I was the last one on the list. Very nice tech who've I've not seen before. We chatted about stuff, she did her thing and then I was sent back out to the waiting room to be called to see the RE. It was probably about 20 minutes until he called me into one of the rooms where I waited about 10 minutes while he saw someone first.

We chatted. I filled him in on what's been going on IF-wise and gave him copies of the blood test results from the OB and Internist as well as the reports from the pelvic u/s and sonohysterogram I'd had in December. I mentioned we were looking to cycle in April or May (but I think he promptly forgot or didn't hear me as he was reading). I also mentioned that they tests showed I was heterozygous for MTHFR. He basically dismissed this with a wave of his hand and said 40% of women have this issue. I know that it's not the answer for why our cycles have failed, and he agreed that we have great embryos and my uterus is excellent (so says my OB). However, he agreed that taking the 5MG of folic acid make sense. Even if he didn't agree, I'd still be taking it. And I'm thinking I will add the B6 and B12 with it but I'm not sure what the daily amount would be. Anyone have any ideas? In an email chat with Amanda she gave me some insight into her past protocols, specifically the one that gave her Adam, and I'm now considering starting the Fragmin a bit earlier in the cycle. Normally I am told to start the immediately following transfer, but maybe a couple of days earlier? Any ideas here?

So, for now, I am continuing to take the 5mg of folic acid and a baby aspirin each morning and I'm taking a regular multivitamin in the evening. I'll go back into the clinic on CD2 of the month we decide we're doing the FET and it's about 13 days from then to transfer. If it is April, then we're looking at CD2 being on or around April 3rd...I can say for sure, we aren't doing it then. So that means May would be the month with transfer occuring the weekend of V's birthday.

Anyway, that's all the news that's fit to print. Hope everyone is having a great day on this glorious, sunny day!
Posted by Pam at 2:26 PM 4 comments: