Okay, maybe I didn't have dinner with him but I cooked dinner with him.
Okay, maybe not "with" him, exactly. But he was in my kitchen....uhm, okay on my tv....and I was cooking with him as he cooked. Yeah that was it. But it was still pretty cool.

He was on F.ox last night showing Coo.kalong Live with Gor.don Ram.say. It was pretty cool. He claims that we can all make a three course meal for four in one hour and he was going to prove it. He had several celebrities in the studio to help him out, as well as a number of people in their homes on skype that were going to cook along. As long as you knew about the show in advance you were able to download the ingredient and equipment list in advance and make sure you had everything you needed to make the three dishes.

We love GR from his other shows. And I already knew he spoke quickly, but OMG! I found that initially it was a challenge to keep up with him but we were able to get through the hour with three quite good dishes. 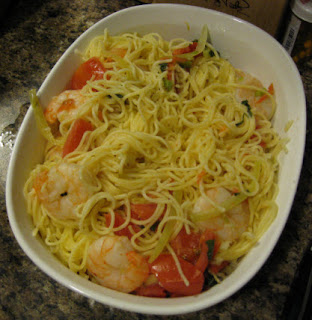 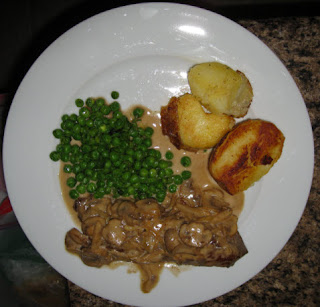 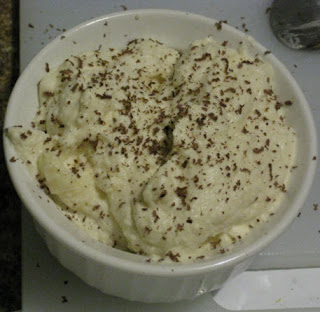 Check out what others are showing at Mel's Show & Tell.
Posted by Pam at 11:18 PM

That's awesome! I wish I knew in advance about the show and would have tried to cook along. I did enjoy the show though. Where did you find the ingredients list?

Was he OK and not using swearwords all the time? I stopped watching his shows after it got to just fighting and screaming in the kitchen.. I now watch Ready Steady Cook on BBC2 but there is no way one could cook along with that!
Looks good!

Oooooh, that looks delicious! You did a great job.

Baby on Mind - the ingredient list and now the recipes are up at http://www.fox.com/cookalong/

Valery - he promised not to swear but he has trouble so they bleeped him a few times. It wasn't like when he's on Kitchen Nightmares or Hell's Kitchen.

I think you may be able to find the show somewhere online.

I watched the show and it was fun. Leanne had her game face on and did the best.

That is impressive ! It looks yummy, congrats on the cookalong.

Once A Mother said...

delicious... the pics have my mouth watering. those potatoes look AMAZING, kinda crunchy... yummy! thanks for sharing. you should feel very proud.

It looks great! That sounds like a lot of fun, cooking along with the show.