Happy "Belated" Birthday to Me

So, yesterday was my birthday. It wasn't a major one, but I'm pretty damn close. I had told V that I didn't think it was fair that every year, since his birthday is the May 2-4 weekend, we always have a party/bbq for him. It's usually the first bbq of the season and generally is quite a big affair. Not fancy, just a lot of people, food and drink.

Last year we missed out in his birthday because it was his Dad's 70th (his 40th) and so this year he wanted to make up for it and have a 40/41 birthday bbq but with everything going on we had it in July. So, it was that party which had probably 60+ people at it, and dancing in the basement, I decided I wanted something...just because it wasn't fair. :) Once I said that to him, it was a done deal. But, I said I didn't want a bbq. I wanted a West Indian feast. As many of you know, V is Trinidadian, and over the years I have learned to make a number of different foods and grown to like them.

So we although I didn't prep the whole party, and asked some people to bring and we bought a few items, I still did make a few things, namely the curried chicken, curried chickpeas and potato and the bbq chicken. Oh, and I also made my cake. :)

And because I made my cake, I didn't just make a cake with buttercream icing...I MADE a cake. I've been taking cake decorating classes for the 4-5 months and have shown you some of the results of those classes. Well, I decided I was going for it...... 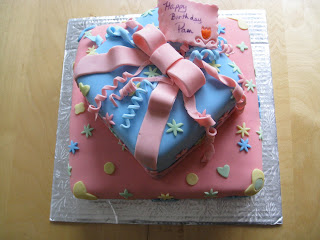 I'm curious as to what kind of cake was under the pretty icing? Vanilla?

Oops, apparently I forgot to leave out the particulars of the inside. :)

It was a chocolate fudge cake with a cherry filling, covered in a light layer of chocolate buttercream and then covered in fondant.

I'm drooling as I read your comment about what was IN this beautiful cake. Happy birthday!