First I have to apologize for the drought in posts. There's been nothing to update you with but I've emailed the agency to see what the donor's status is regarding her bloodwork. I'll update when I hear something.

V. is a pretty amazing, special guy. Regardless of how stressful he's finding life (both work and home) he's still thinking of me and how he can surprise me with something. As you know from his last post we've got a new nephew but he's in Ot.tawa. So finding the time to go see him, or just visit them this summer has been difficult as we've got very few free weekends. I'd hoped that we were going to be able to go up on Friday and hang out with them, and if possible arrange to get together with Gil. But alas, the weekend I envisioned didn't materialize.

TC spend several nights at a sleepover so V. and I had some much needed time to reconnect and relax. Friday night we hung out with Patti and Mark, Saturday found us with a long list of tasks of which I believe we got 2 things done. However, we finally saw the Harry Potter movie with a friend and her son. Because we went to a late afternoon flick, I just wasn't hungry yet to go out and eat. By the time I said we should go, V. said "yes, time is short". As it's about 8pm, the comment seemed out of place until he handed me an envelope and said "because we're going here". I open the envelope and find two tickets the the 9:30pm show for Toronto's Just for Laughs. We decided to opt for subs because he also told me the plan was to pick up TC after the concert, catch a few hours of sleep and head off to our nations capital to see the baby. Yeah! So, instead of going out for a nice dinner (he still owes me and I'll be collecting) we stopped first at Chapt.ers for a copy of "Walter the Farting Dog" for our almost 3 year old nephew and new big brother (great book), and then ran into Zellers for a gift for the baby. No easy feat to accomplish in the 10 minutes I had while V. zipped across the street to grab the subs for us. However, I managed to pick up a cute 3 piece set for him. We headed down to the concert scoring a pretty decent parking space, at dinner, and then wandered over to the show. We had a great time. Craig Ferguson was the host and opening act - absolutely hilarious. Who knew he could do stand up. There were 5 more comics several of whom I'd heard of. But Russell Peters was the closing act. For those of you who haven't seen him, if you get the chance, go. He is absolutely hysterical and will have you in stitches. This was the second time we've seen him as we were lucky enough to attend one of his sold out shows in June when he played Toronto. And the best part is that he's a local boy.

So, we go pick up TC about 12:30am and head home with the intention of leaving around 4-4:30. Well, for those of you know who us, go ahead and laugh. There was just no way. We were both pretty tired so we didn't leave until 8am. Now, remember, not only did V. surprise me with our weekend, we didn't tell BIL or SIL that we were coming down. This was going to be a surprise for them as well. :) We love just showing up. We get into Ot.tawa about noon to find that they aren't home. V. has to creatively text them to find out where they are and when they are returning without giving away our whereabouts. They say they'll be home in an hours so after I got some work done (yes, I was on call this weekend) we headed out to find something for lunch. Ending up with a couple of pizzas for us all, we head by for about 2pm only to find that they haven't returned yet. He calls them and BIL says "I'll call you back" so we don't know where they are or when they're coming back at this point. We wait a bit until V. says he's got to blow the surprise and tell them where we are so they can get themselves home so we can have a short visit before heading home. Just as he's typing the message, they come around the corner with BIL jaw dropping to the ground as he sees us. They are totally surprised and absolutely thrilled.

We had intended to stay an hour or so and head home in time for dinner. Again, I didn't think this was going to happen as it never does when we go. So, we hang out, play with our 3yr old nephew and I get to bask in my new nephew (I did share with V. and TC). After eating dinner with them, we headed home about 8:00pm arriving in our driveway about 11:30pm.

So, I heart V. for being able to pull of these surprises. We had a great weekend!!

I will leave you with some photos of the latest member of the family - Nathaniel Terrance Afif (I think his name is longer than he is). 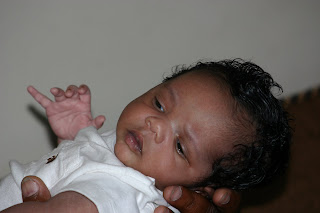 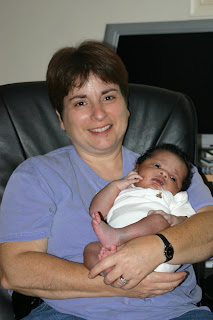 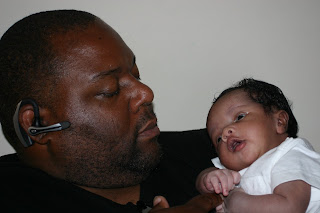 Nathaniel is adorable, thank you for sharing the pictures.
Looking forward to news on your cycle soon!

He is SO sweet!

You know, now that I've finally seen V with that thing out of his ear for a whole night, I can sleep better at night. I thought he was going "borg" on us. ;)

Glad the night out worked so well. You BOTH needed a good laugh.

What a great surprise trip and a gorgeous little baby. :)