I'm not sure if anyone else is though. LOL.

Apparently I last posted in September. That's pretty sad. But then again, there hasn't been a whole lot going on.

V and I still have to move, that hasn't changed, but we're seriously considering a huge downsize. It's time we took control of our living situation, and not gave that control to someone else. So we're considering moving into a 2 bedroom (maybe 3 depending on price) apartment and purging everything we don't require. We are currently in a large 4 bedroom house and have tons of stuff. So, we are planning on liquidating everything we don't need. For those of you who know us IRL, that's huge. Our plan is to give ourselves 1-2 years in this new place with the expectation that at the end of that period we will have cleaned up our finances AND saved enough for a downpayment. I think it's do-able.

V and I had the above conversation in the car on our way back from a weekend visit to my BIL/SIL in our nation's capital. Ad we were lucky enough to meet up with Gil, her DH and Petite. Three hours sitting around a table is just not long enough. But, we've got a weekend tentatively booked for them to come hang out with us. Woohoo!!!

During that converstion, I posed the question to V. "what if our final cycle is successful" in regards to space in this new place. There was silence to which I added "or don't you want to do this anymore". I knew I had put him on the spot, and when he said "I didn't want to have this conversation in the car", I knew my answer. We had a frank conversation as we drove. He explained how he felt and why, and that he didn't want me to have to go through this anymore. We had tried so many times. I explained to him that with the failed cycle 3 years ago, we never got the chance to do the last attempt, and with that cycle we were doing a number of things differently in the hopes it was the one. I told him that I needed to do this final cycle, that I had to do it. It would be the only way I would be able to close the book on this chapter of our lives, regardless of the outcome. I also told him that we almost had all of the funds we needed through my saving each month and that given our current saving scheme, I figured about 10 weeks would be it. He was worried that if the cycle fails that he will have a partner who will always be sad and unhappy. I assured him that this wasn't the case. Yes I would be sad, but I wouldn't let it affect us or our relationship, and that time would heal everything. So, given our conversation we are back on track and hoping to accelerate the saving plan to get to our goal before the end of March.

So, to close out, I figured I'd give you some photos of some of the projects I had in the November and December.

These were some of the cookies I did in November for my cousin's daughter's wedding. 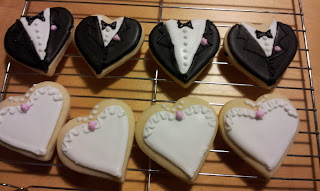 These next two pics are of chocolate covered strawberries also done for the wedding, made to look like tuxedos and wedding gowns. I did some in milk and some in dark chocolate. 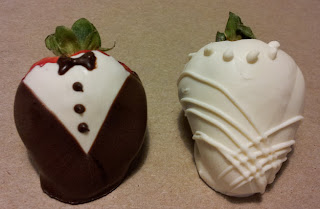 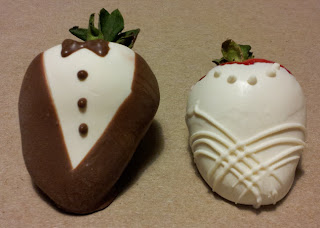 The Jack Skellington cookies were done as a surprise for the daughter of a my "sister from another mister". She is a huge fan of the movie franchise and I knew she would get a kick out of them. 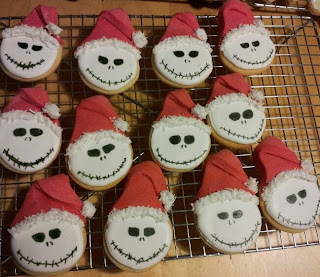 Finally, this was the 4th birthday cake for her little brother 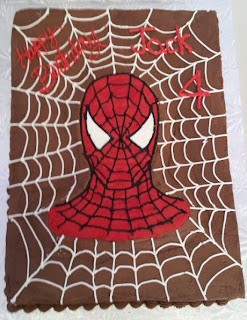 YAY for a whole weekend together! We are really looking forward to it. We always do so love to see you guys. Petite was asking the other day about you both actually. I reminded her that we're going to see you guys soon! Promise! She was happy with that.

As for "the conversation," I can certainly understand why V would want to ensure that you aren't sad or dwelling on a negative outcome; it'd be so hard to be with someone who cannot move forward. Ever. But I think that you are not that kind of person. I know that if perchance the outcome is negative, in time, you would move forward. That said, I'm like you; I would have to put it to bed once and for all. Finish what you started. Yanno. Get through all the options as you had them laid out and THEN, and only then, can you accept whatever comes next.
Besides, you never know what the outcome will be if you don't try! "Il vaut mieux vivre avec des remords qu'avec des regrets. Alors essaye! ESSAYE!" Hugs and love to you both! Always!!! *smooches*