Some pix of Cuba

Here are a few pictures that V. took while we were on vacation.

These two are the view we had from our room. Amazing! :)

The resort had three connected pools with a bar in the middle. We were also just a brief walk to the beach. 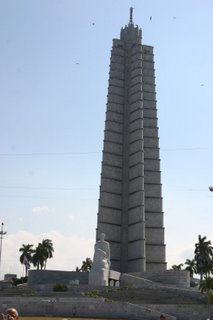 We visited Necropolis Cristobal Colon, which is Havana's most famous cemetary. It is known as, Havana's 'City of the Dead', because we were told that there are 2 million people buried there, and in it lies the grave of La Milagrosa, a woman who died in 1901 during childbirth, was mourned by a heartbroken husband and is revered by Cubans as their unofficial saint. As the story goes she died in childbirth and so did her in son. They were buried together, with the child at her feet. Her husband was so distraught that he'd visit her grave, sometimes 3 times a day. He's knock on the lid to let her know he was there, and when he left, he'd back away and never turn his back until he could no longer see the grave. When her body was exhumed a number of years after he death, her body was still intact as if she'd just been buried. As well, the child was now in her arms. Because of this she was viewed as a saint. Now, many people visit her grave and pray asking for wishes to be granted. Many of these visitors are women who are unable to have children. So, when V. and I heard this story, it seemed that we should take advantage of being there. So we too said a prayer to La Milagrosa hoping that our wish could come true as well. For read about this legend go here. 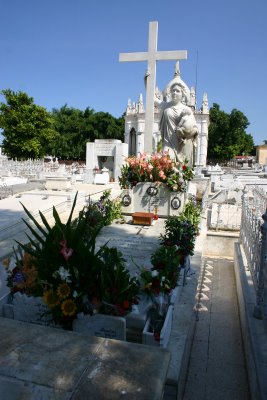 It's interesting where you meet others going through the same IF journey as we are. We were speaking with our favourite bartender at the resort and asking if she had children (to determine what we'd be giving her from our treats stash). It turned out that she and her husband didn't have children and were working with a doctor. I believe she even made the motion and mentioned injections. So, it's a pretty small world.
Posted by Pam at 9:23 PM