I'm still here...or what I've been doing while on hiatus

V pointed out to me that the my last post was October 31, 2008. I knew it had been a while. I didn't realize it was quite that long.

There's really not much going on IF-wise. When we last left our story our doctor had suggested using a surrogate and we had decided that financially, this was just not an avenue we could go down. Since then, and without going into any detail, we had a wonderful offer for surrogacy that in the end was not able to move forward. And we thank that person for even thinking of doing that and making that offer and putting herself out like that, regardless of the end outcome. So, we're back to doing our final FET hopefully March, but it may work out to being more like April or May.

I have also been to my own doctor for my annual checkup and to bring her up to speed and get her take on things. She found that my fibroids have returned (arg!) and since we have time before we are going to be doing anything, she has given me the requisition for a transvag ultrasound to see what's going on in there with them. I've got that scheduled for later this week and expect I'll hear something in January. Hopefully we don't have to do anything about them, and they aren't impeding progress.

So, to keep myself busy over past month and into the Christmas season I've been knitting and planning various parties. We are hosting six social events including the family Christmas. Three down, three to go.

November 22 and 29 had V and I hosting baby showers for two very close friends that are really family, and are having their babies in January, four days apart. One was for one if V's oldest friends (since high school) and the other was for Patti and Mark. I know that some of you think that I'm insane for wanting to put myself through the whole shower thing, but you know it didn't bother me. What does get to me is when people are sitting around swapping birthing stories, or passing around all the gifts. However, neither of those happened so all was good. We had the decorations, the games (which were pretty funny) and some great gifts. I chose to knit for both of them and in the end knitted the same thing in different colours. Patti had given me strict instructions that we weren't to buy them anything and by knitting, I abided by their wishes. ;) Part of the decorations for each shower was a diaper cake that I made (with the help of a friend). 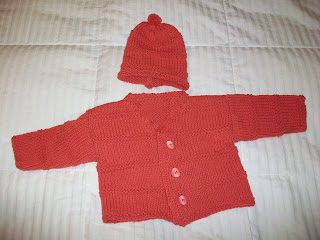 This is the sweater I made first for our friend K who's shower was first.

I don't currently have a photo of Patti's sweater, but here is a swatch from the yarn website of the colour I used for hers. 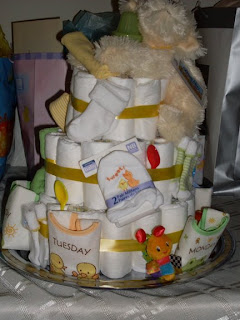 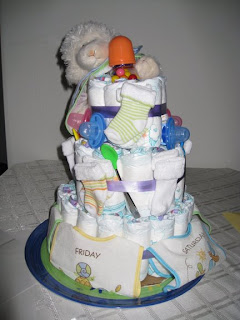 Each shower had about 30 guests who all seemed to have a good time.

The week following Patti's shower we hosted our annual Christmas Poker Potluck which he been going on for a number of years. This year about a dozen of us attended, and I made a completely non-Christmas pull pork recipe. We also always do a gift auction where you bring a gift with a value up to $40. We draw playing cards to see who starts and from there the first opens a gift. The next person has the option of "stealing" that gift or opening another gift. This goes on until all the gifts have been opened. This year I think the gift exchange lasted almost an hour as there were much thievery going on. Everyone had a good time and I don't believe anyone lost too much money during poker.

This coming weekend we are hosting our 5th Annual Christmas Open House. We usually have upwards of 100 people on the Evite but only see 1/3 to 1/2 that number. This year we may be seeing a few more as we've got 60+ people saying Yes. If there are any readers who will be in the GTA on Saturday who would like to join us to raise a glass to the holiday season, let me know and I'll add you to the list.

Our fifth event is much smaller and is just brunch for some family members on the 21st who can't join us on the 13th.

Then there is Christmas Day. We do this as a potluck event as well as we are expecting anywhere from 20-30 people if everyone were to attend. V and I provide the turkey and the ham, a few other dishes, beverages and I'm in the process of doing my holiday baking.

It wouldn't be a Trini Christmas without black cake (a very dark cake made with dried fruits and rum), ponche de creme (sorta like egg nog with a lot of rum), Sorrell drink or liquor (a drink made from the red sepals of the roselle plant), and Parang.

Anyway, that's what I've been and am doing right now. I'm hoping to participate in Jenn's virtual cookie exchange so watch this space in the next few days for my contribution.
Posted by Pam at 4:41 PM

I am so sorry I haven't sent you a pic of the sweater yet. Honestly, it's on my list of things to do and I will get it to you asap (just keep nagging me, okay?).

The shower was awesome and we had a great time. Even the games were fun!!

You two are insane for doing all the hosting of parties that you do, but I'm glad you do it. See you on Saturday!

Just a quick drive by to say hi! Good to hear from you

Hello-
I am an adoptive mom who rode the infertility roller coaster for four years. I just started a not for profit called Parenthood for Me.
Our mission is to provide financial and emotional support to those starting families through adoption and medical intervention.
I am reaching out to the adoption and infertility community to spread the word. Please visit my website and sign up to be on our mailing list.
Also, if possible, pass the link on to your circle.

I appreciate the help.

Diaper cakes make the best gifts! You sound like you're in a good place, despite a very difficult year. How awesome are you?!